No Crying Allowed in the Barbershop…it’s about recreating my memory. When I was five years old my father took me to get my first haircut right around the neighborhood. And what was meant to be a celebration became a disastrous event. I was crying a lot. I was scared…What traumatized me wasn’t so much the haircut itself but the way that this barber dealt with my kind of hair…That experience was a combination of race and a right of passage into becoming a little man.
—Pepón Osorio, from Art:21—Art in the Twenty-First Century

This exhibition featured artist Pepón Osorio’s En la barbería no se llora organized by Real ArtWays in 1994. Osorio transformed a vacant store at 481 Park Street into an installation based on the traditional Latino barber shop. This installation included the original barbershop chair acquired by the Wadsworth with contextual photographs and video of the installation. The exhibition asked visitors to share their first (or worst) haircut. 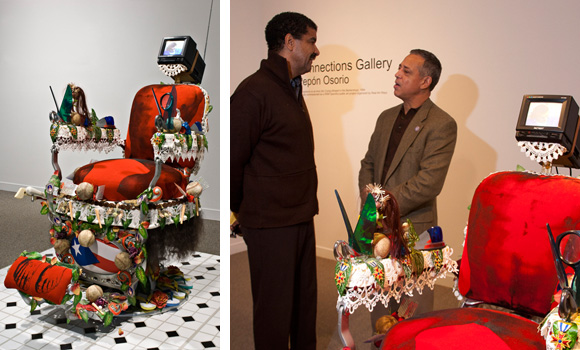